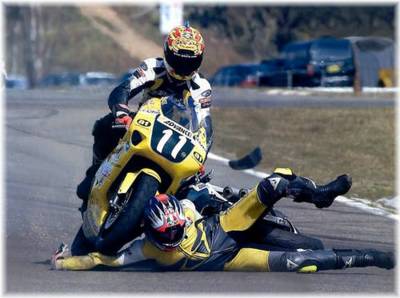 Here is a pefect example of why I say "There is no fender-bender on a motorcycle."

That's what we in the business call "painful". He won't die, but probably wished he would.

Here is an interesting article about the PA helmet law 4 months after being lifted.

"In the first four months that helmets became optional for riders 21 and older, deaths among helmetless riders more than doubled, from six to 15, compared with the year-ago period. Fatalities among riders wearing helmets dropped 28 percent, from 25 to 18."

"No one here will be able to draw any conclusions,'' said Ed Myslewicz, a spokesman for the state Department of Transportation.

WHAT? What will it take to draw conclusions? A connect the dot exercise with pictures of conclusions?

State Sen. John Wozniak, a Cambria County Democrat and motorcyclist who helped shepherd the bill through the Legislature, said he expected a "small spike'' in injuries among helmetless riders, but predicts it will be temporary as riders adjust to their new freedom.

HMMMM, you must be right. It's obvious to me that when people aren't forced to wear a helmet that they go out and crash to "adjust to their new freedom".