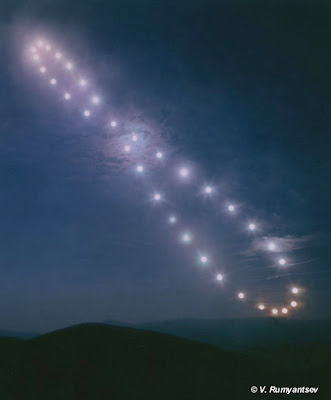 Explanation: If you took a picture of the Sun at the same time each day, would it remain in the same position? The answer is no, and the shape traced out by the Sun over the course of a year is called an analemma. The Sun's apparent shift is caused by the Earth's motion around the Sun when combined with the tilt of the Earth's rotation axis. The Sun will appear at its highest point of the analemma during summer and at its lowest during winter. Analemmas created from different Earth latitudes would appear at least slightly different, as well as analemmas created at a different time each day. The analemma pictured to the left was built up by Sun photographs taken from 1998 August through 1999 August from Ukraine. The foreground picture from the same location was taken during the early evening in 1999 July.
No comments:
Email ThisBlogThis!Share to TwitterShare to FacebookShare to Pinterest

HOW TO ARGUE EFFECTIVELY

I argue very well. Ask any of my remaining friends. I can win an argument on any topic, against any opponent. People know this and steer clear of me at parties. Often, as a sign of their great respect, they don't even invite me. You too can win arguments. Simply follow these rules: DRINK LIQUOR


Suppose you are at a party and some hotshot intellectual is expounding on the economy of Peru, a subject you know nothing about. If you're drinking some health-fanatic drink like grapefruit juice, you'll hang back, afraid to display your ignorance, while the hotshot enthralls your date. But if you drink several large martinis, you'll discover you have STRONG VIEWS about the Peruvian economy. You'll be a WEALTH of information. You'll argue forcefully, offering searing insights and possibly upsetting furniture.

People will be impressed. Some may leave the room.

If an opponent asks you where you got your information, make THAT up too. Say:

"This information comes from Dr. Hovel T. Moon's study for the Buford Commission published on May 9, 1982. Didn't you read it?" Say this in the same tone of voice you would use to say, "You left your soiled underwear in my bathroom."

USE MEANINGLESS BUT WEIGHTY-SOUNDING WORDS AND PHRASES

Here's how to use these words and phrases. Suppose you want to say,"Peruvians would like to order appetizers more often, but they don't have enough money."

You never win arguments talking like that. But you WILL win if you say:

"Let me put it this way. In terms of appetizers vis-à-vis Peruvians qua Peruvians, they would like to order them more often, so to speak, but they do not have enough money per se, as it were. Q.E.D." Only a fool would challenge that statement.

USE SNAPPY AND IRRELEVANT COMEBACKS

You need an arsenal of all-purpose irrelevant phrases to fire back at your opponents when they make valid points. The best are:

You're begging the question.
You're being defensive.
Don't compare apples to oranges.
What are your parameters?

This last one is especially valuable. Nobody (other than engineers and policy wonks) has the vaguest idea what "parameters" means.

Don't forget the classic: YOU'RE SO LINEAR.

Here's how to use your comebacks:

So that's it. You now know how to out-argue anybody. Do not try to pull any of this on people who generally carry weapons.