Exxon-Mobile: I hate you

"Daggle, who has been an Exxon dealer for two decades after working his way up from pumping gas, said he has done well. But he still cannot fathom how the oil company can charge him different wholesale gasoline prices for each of the five Northern Virginia stations he owns. The stations all sell the same Exxon-branded gasoline, delivered from the same terminal in Newington, where it arrives via the same pipeline. Sometimes, Daggle said, it's even dropped off by the same truck and driver hours apart on the same day.

The only thing that's different is the price, which can vary by 35 cents per gallon, Daggle said. "If I could have driven a truck to Gainesville and drive the gas from there to Shirlington, I could have made 50 cents a gallon."

Complete and disgusting story of greed here.
No comments: Links to this post
Email ThisBlogThis!Share to TwitterShare to FacebookShare to Pinterest

Calculator with a virtual tape! 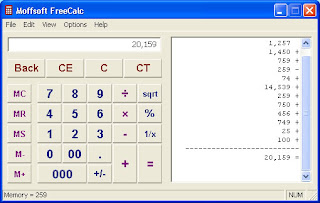 If there's one thing I love it's FREE stuff that just works.

Here is a free calculator from Moffsoft better than your windows calculator and probably better than the RadioShack 1067a in your desk drawer. Why? It has a virtual running tape on it.

I can't tell you how many times I have added, then re-added figures. No more, Joe, no more!
No comments: Links to this post
Email ThisBlogThis!Share to TwitterShare to FacebookShare to Pinterest
Newer Posts Older Posts Home
Subscribe to: Posts (Atom)